skip to main | skip to sidebar

I went to couple of really good talks about the global AIDS/HIV epidemic today put on by Amnesty International and a host of student groups here at the UofC. It was really interesting to see the doctors and lawyers in the global fight and their extreme care for all the issues and then some local activists seemingly lack of caution. But the doctors at the conference proposed a problem that is beyond them right now and until it is solved there will be no end to the amount of money needed to solve the epidemic. Let me outline the situation.

Currently, medical data shows that very few methods are very affective at prevention of the spread of disease. In most the world the position of women have made them more vulnerable and unable to prevent contact with the disease. Examples that the doctors gave were in Uganda and India.

Uganda has had one of the largest AIDS programs in Africa for the longest time, but mostly it has been focused on an abstinence only solution. But still prevalent in the country is men with the disease who marry. Then it is virtually assured that the woman will contract the disease. Not to mention that a large number of the women in the county have been raped and contracted diseases this way.

In India, female sex workers and truck drivers are considered the prime transporters of the disease. There are a large number of sex workers from villages where making a living is quite hard. It is only a matter of time before the sex workers contract a disease from a trucker and bring it back to their village and so on and so forth.

Condoms are not really the answer in most cases because they are a male controlled prevention method. Doctors would like to introduce more spermocides and microbocides into use, but women will not accept these methods because they harm their chances of having a child. These women see having children as their mandate and will be worthless to their communities otherwise.

Now to the problem. How do doctors stop the spread of this disease when the only methods they provide go against the nature of women? Empowering women by denying their nature has worked quite well in American culture but is fervently rejected in the third world. What good is the science if no one uses it?

My one thought on this matter, for whatever it is worth, is that the prevention and treatment of AIDS with drugs is futile without the reduction of poverty. This would help reduce prostitution throughout the world and at least give women a chance to be economically free enough to have more options in their lives. One of the doctors pointed out that even if we have all the right drugs and money, it is still that people can't live in their culture in a normal way. And with all these problems we see AIDS becoming more and more a disease of the marginalized and its effects being ignored by the rich and powerful. At what point does the world wake up and address these social and economical rifts that are robbing the world of so many lives to AIDS?
Posted by Andy R. Terrel at 10:57 PM No comments:

So after writing a few labs for my class on generating fractals, I went searching online for some pictures that other people came up with. I found the great video on Google Video. To tell you the truth, I think that the complexity of the Mandelbrot set (which is produced by a very simple iteration process) is just amazing and speaks volumes to what is beautiful in the sciences.

I am always at a loss when students will say they think some subject (such as Mathematics) is beautiful but have no ability to reason why. Maybe it takes a philosopher, in the rough sense, to tell why something is beautiful and only a casual observer to say it is beautiful. I really don't like this reasoning though because it lends to the fact that beauty is only in the eye of the beholder (ie relativism) and not a virtue to attain. But if I ever had to explain what beauty is in Mathematics, I think will most definitely point to the Mandelbrot set.

Anyone can generate parts of the Madelbrot set, its really easy to do. It takes a really bright person to fully comprehend all the reasons for its complexity, I mean its just about connecting all possible Julia sets which represent chaotic pattern studies in dynamics .... =D I guess to me there are few things that can be simple stated and represent so much.

So we Chicagoans get to see the sun for the first time in three days, but I am still wrapped up about a conversation I had last night at my parish. There was a priest from the Comboni Missionaries there who had just come back from south Sudan this past June. He had lived there for the past ten years as a parish priest.

As we ate pizza, I asked what they ate in south Sudan. He said that people in the regions where he lived only ate one meal a day. The meal was composed of a some flour and water with peanuts and a sauce on top. This was the only meal you ate every day. The people could not grow very much food in the region and they didn't have the resources to raise much more than a few chickens and goats.

I then asked about disease, in particular AIDS. He said something that really shocked me. Since Sudan is an Islamic State the government will deny anything that makes it look as if the country isn't perfect. This includes AIDS. While there is obviously a growing epidemic, the government flat out denies it and medical clinics treat people with AIDS by giving them some form of aspirin.

I guess anytime you get a real description of a third world country it is a bit shaking. I knew that life in Sudan was bad, but it seems that every time I hear more about the country it is worse and worse. Of course, it also makes me question what is the use of computer science when people are out there are starving and being marginalized by a blind government.
Posted by Andy R. Terrel at 10:02 AM 2 comments:

Trees, Fractals, and Fellowships! Oh my! 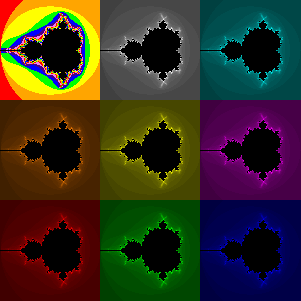 It's been a long week. Having a tree fall on my car, every bill come in with a late fee, and the city raising my property tax, has made me believe that money really hates me. But I did make what I thought to be a neat lab for my students, making fractals like the ones in the pictures. And I really hope I get this travel fellowship or else that's just more money down the drain. Goo I'm tired but I wanted to say hello to the world.
Posted by Andy R. Terrel at 11:33 PM 1 comment:

While avoiding the dirty dishes that have made a hostile takeover in my kitchen, I noticed that google has put me at the top of some unlikely searches. I elaborate:

I hope you enjoyed some of goggle's algorithms as much as I have.
Posted by Andy R. Terrel at 9:13 AM No comments:

Blogs of Professors Blogs of Students Blogs in Spanish

Some Other Blogs I read